HORWATH THE NEW TARGET AS NDP MOVES INTO SECOND PLACE

As the Ontario election campaign begins a second week, NDP leader Andrea Horwath is finding herself the target of both the Progressive Conservatives and the Liberals.

The most recent Mainstreet Research poll has Horwath’s New Democrats solidly in second place ahead of the Kathleen Wynne Liberals and behind PC leader Doug Ford.

“It’s no doubt a sign of shifting polls and a recognition that the contest is shaping up differently in different parts of the province,” said Sean Speer at the University of Toronto’s school of public policy and governance.

“This next week may well determine if Andrea Horwath and her team are ready for prime time.”

During campaigning on Mother’s Day, Horwath refused to entertain the idea of forming a coalition government with the Liberals should the PCs win a minority on June 7th. 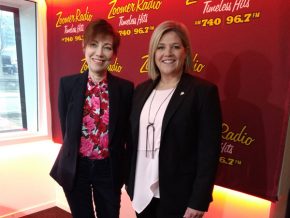 Horwath has a scheduled visit to Zoomer Radio’s Fight Back with Libby Znaimer Thursday after the noon news.