It’s been nearly two years since Vision Zero was first announced. And yet, over a 24 hour period this week, one cyclist was killed and two others were injured on Toronto streets. 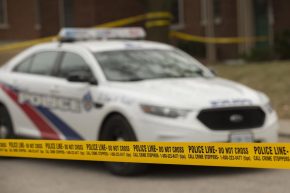 A male cyclist, believed to be in his 50s, died during Wednesday morning’s commute at Dundas and Jones in the Leslieville area of Toronto. Investigators say he was hit by a truck that was attempting to make a right turn onto Jones from Dundas.

Paula Fletcher is the city councillor for the area and says the bike lanes have been neglected.

“This is poorly demarcated, you see it’s been all ripped up, not painted back. This should be green here,” Fletcher pointed out while at the site of the tragedy,”There’s not been a lot of attention to the Dundas bike lane, compared with other bike lanes in the city.”

Another cyclist, a man in his 30s, was seriously injured after a collision with a vehicle near Lakeshore and Colborne Lodge Drive on Tuesday afternoon.

A third cyclist suffered minor injuries early Wednesday after a collision with a coach bus near Queen and Jarvis.

The deceased cyclist is the 89th pedestrian or cyclist to die on city streets since June 13th 2016, the day Mayor John Tory announced the initiative that would become Vision Zero – a plan to reduce traffic deaths to zero by 2021.