“The Lost Rhapsody of Leo Spellman” is a documentary film about a musician and Holocaust survivor from Poland who composed a symphony at a displaced persons camp in Germany following World War II. 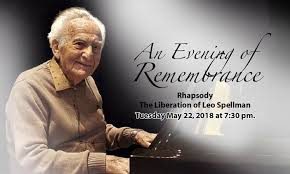 The symphony, “Rhapsody 1939-1945” was performed only once by Spellman and some Jewish musicians at the camp until it was finally recorded in Canada in in 2012.

Canadian film director David Hoffert is raising funds to finish the film which follows Spellman to Toronto after the war where he formed a dance band called “The Leo Spellman Orchestra,” which played all the popular songs of the time.

The film has been in the works for six years.

To help raise funds for its completion, Beth Emeth Congregation in Toronto, where Spellman was a longtime member, will be hosting “Rhapsody, An Evening of Music & Hope on May 22nd.”

Zoomer Media’s Marilyn Lightstone will be reading from the secret diary that Spellman kept from 1943 to 1945.

For more information go to beby.org