With the warmer weather ushering in tick season, experts are warning about a spread of the tiny bugs which transmit Lyme disease . 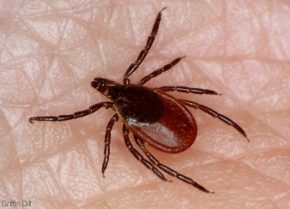 The condition is a potentially debilitating infection that can result in heart problems, extreme fatigue and nervous system disorders.

Ontario’s Chief Medical Officer of Health Doctor David Williams says ticks have moved into cottage country in the Simcoe-Muskoka district. They’ve also spread to York Region, Hamilton, and the Niagara region as well as the Rouge Valley on the east side of Toronto.

“We’re finding more and more areas where the tick is infected with the organism and the changing climate is making it more and more conducive to the replication and reproduction, so spreading farther into the province,” Williams explained.

Doctor Williams says the key is to be vigilent and protect yourself.

“That means longer pants instead of shorts with the pants tucked into the socks, wearing proper long sleeve shirts, and putting on protective material like DEET, products like that to discourage the ticks from latching on,” said Williams.

Listen for more on the spread of ticks in Ontario on Zoomer Radio’s Fight Back with Libby Znaimer on Tuesdaty at 12:30pm.