Toronto’s Mayor is calling for help from Ottawa to deal with an influx of refugees. 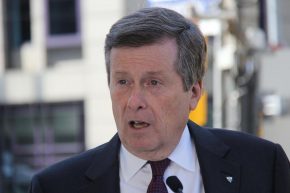 John Tory insists “the city could not, cannot and should not be doing this alone” and it’s time for the Trudeau Liberals to help out before Toronto ends up having to turn any homeless person away from its shelter system. Tory says the city has already budgeted almost $65-million to provide food and shelter for refugee claimants.

As of Friday May 18th, there were only 20 vacant beds out of the record-breaking 6740 the city now funds.

A report in the Toronto Star says the current bed shortage is not the result of poor civic planning but of an unprecedented influx of thousands of asylum seekers travelling here from the U.S. In fact, refugee claimants now make up more than 40 percent of Toronto’s shelter population, up from just over 11 percent in 2016.