Kensington Palace has released details of the newly created Coat of Arms for the former Meghan Markle – which is an honour accorded by tradition to the nobility.

The Coat of Arms for the Duchess of Sussex – as she is now formally known – includes symbols that reference the former actress’ background – and look to her future. 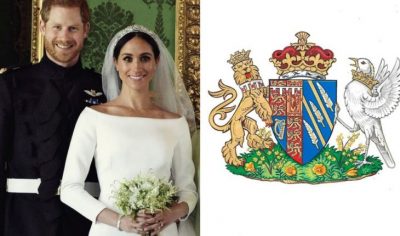 The blue background represents the Pacific Ocean – and there are golden rays of sunshine reminiscent of California – her home state.

The shield includes three quills – representing the power of words – a nod to her former website which was used as a forum to discuss social issues.

A collection of golden poppies, California’s state flower, sit on the grass beneath the shield – together with wintersweet – which grows at Kensington Palace.