Peel Police have launched a multi-faceted investigation into an explosion at a Mississauga restaurant last night that was believed detonated by two men seen leaving the scene. 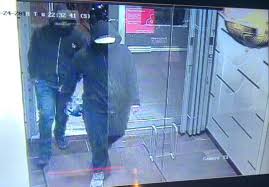 15 people were injured, 3 critically, when what police are calling an improvised explosive device went off at the Bombay Bhel near Hurontario and Eglinton.  The 3 critical victims have now been upgraded to stable.

Mississauga Mayor Bonnie Crombie told a new conference this morning that this is a heinous, reprehensible, act committed by cowards.  Peel Police Chief Jennifer Evans told the same news conference that her force is liaising with other GTA police services, the OPP, the RCMP and intelligence teams who are working behind the scenes.

The two suspects are described as fair to light skinned men who were wearing hoodies pulled up over their heads.