It was a heated debate Sunday night and not always polite, as the three Ontario party leaders interrupted each other at times to get in their jabs and grab the attention for themselves. 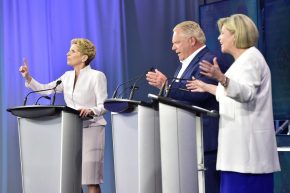 Liberal leader Kathleen Wynne, who’s been trending poorly in the polls, tried out a new line to highlight her record as premier ahead of the June 7th election.

“Here’s what I want to say about the last five years; sorry, not sorry. I’m really genuinely sorry that more people don’t like me, but I’m not sorry about all of the things we’re doing in Ontario to make life better,” Wynne said early in the debate before listing off her accomplishments as premier.

The NDP leader also attempted to differentiate herself from the last NDP premier Bob Rae.

“This is not 1990 and I’m certainly not Bob Rae, in fact he’s a Liberal now, but that’s a whole other story,” Horwath joked.

Listen for Libby Znaimer‘s panel of political experts who will break down the final televised debate of the election campaign, Monday after the noon news on Zoomer Radio’s Fight Back.