The police reopened the Stratford Festival theatres and surrounding areas Tuesday morning, after the investigation into Monday night’s bomb threat.

Early Tuesday morning, Stratford Police tweeted that they had turned the buildings under investigation back over to the Stratford Festival staff. They did not indicate whether any suspicious package had in fact been found.

The threat resulted in the cancellation of the Festival’s opening night.

Stratford Police say they received a call at about 6:45pm about explosives being placed at the Festival Theatre. 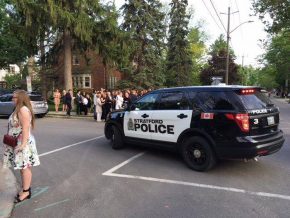 It was about a half hour before a performance of Shakespeare’s The Tempest was to begin that the 1826-seat Festival Theatre was evacuated. The Avon Theatre was also evacuated as a precaution.

Stratford Artistic Director Antoni Cimolino says extra security will be in place for tonight’s performance, including bag checks at the door.

“There are theatres around the world, if you go to a theatre in Paris, often you find that your bag is checked. It’s a sad situation that’s taking place right now,” Cimolino explained.

Among the dignitaries who were set to attend the full house performance was former Ontario Premier David Peterson.

Ticket holders will be reimbursed.