FREELAND LOBBIES TO SEPARATE STEEL FROM NAFTA AS DEADLINE APPROACHES

Foreign Minister Chrystia Freeland plans to return from Washington Wednesday morning after trying to avert an economic storm that could see Canada facing crippling U.S. tariffs on imports of steel and aluminum.

This could happen if U.S. President Donald Trump follows through on his latest threat not to extend an exemption for Canada and Mexico which is due to expire on Friday. 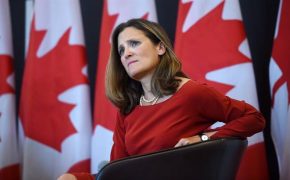 But after meeting with U.S. trade representative Robert Lighthizer on Tuesday, Freeland insists the steel issue remains separate from NAFTA.

Freeland’s lobbying is on top of around the clock efforts by negotiators for Canada, the U.S. and Mexico to get a deal on a renegotiated NAFTA before U.S. mid-term elections and Mexico’s presidential election on July 1st.

After speaking with Donald Trump by phone in recent days, Prime Minister Justin Trudeau phoned U.S. Vice President Mike Pence Tuesday to discuss the trade pact and the potential steel and aluminum tariffs, but the Prime Minister’s Office offered no additional details of the call.