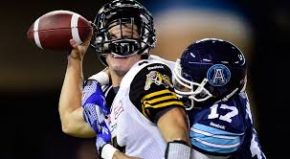 The defending champion Toronto Argonauts kick off their CFL preseason tonight against the Tie Cats in Hamilton.  Kick off at 7:30.

The Argo’s football operations are moving to BMO Field where the team plays its home home games. In addition, the Argos have announced they’ll practice at nearby Lamport Stadium (just across the street from the Zoomerplex) in Toronto’s Liberty Village.