He made news in Canada for his mean-spirited criticisms of Prime Minister Justin Trudeau on the weekend. 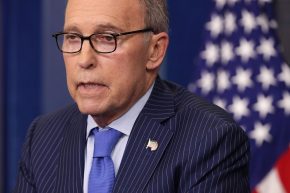 White House aide Sarah Huckabee Sanders says Kudlow is in good condition and is expected to make a full recovery.

Trump tweeted the news from Singapore just minutes before his summit with North Korea’s leader on Tuesday, and said Kudlow is being treated at a hospital near Washington.

Last week, Kudlow joined Trump at the G7 Summit in Quebec, which ended with increased trade tensions between Canada and the U-S.

On CNN Sunday, Kudlow called Prime Minister Trudeau a betraying back-stabber for repeating his criticism of the new U.S. tariffs. and saying Canada won’t be pushed around by the United States.