Here’s a reminder not to just chuck out relics discovered in shoe boxes. 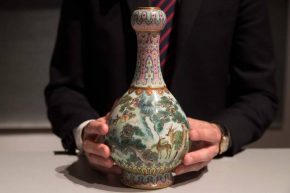 An 18th century Chinese vase, left for decades in a shoe box in France, has sold for almost $25-million.

The vase was auctioned at Sotheby’s in Paris yesterday, selling for more than 20-times its estimated guide price.  In doing so, it became the highest price ever reached for a single item sold by Sotheby’s in France.

The vase formed part of a family inheritance and was recently discovered in an attic.