54 year old actress Brigitte Nielsen and her husband 39 year old Mattia Dessi have released a statement to People Magazine saying she gave birth to their daughter Friday in L.A. 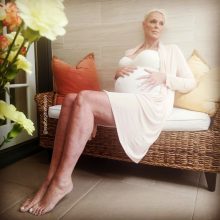 The couple has named her Frida, saying “it’s been a long road but so worth it.”