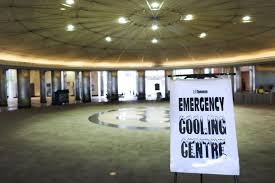 TPH says people can escape from the heat in seven cooling stations across the city – with temperatures expected to reach the mid-30s.

Environment Canada has issued an extreme heat alert for much of southern Ontario – and the weather office says temperatures will remain high into next week – as the area experiences the most significant heat event in the past few years.

And an alert for travellers: Metrolinx says the extreme heat will have an impact on the speed of GO Trains – as they may have to run more slowly – to avoid damaging the tracks during the heat.

GO recommends passengers plan ahead of time – and bring some water along with them.