The most expensive painting in the world, Leonardo da Vinci’s “Salvator Mundi,” now worth $450 million may have actually been done mostly by his assistant. 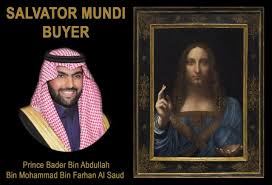 That argument is from a a leading Oxford art historian; the latest voice in a growing chorus of doubters and something which could greatly diminish the value of the piece.

da Vinci scholar Matthew Landrus believes Bernardino Luini did up to 95% of “Salvator Mundi,” and his work usually just sells in the million-dollar range.

The painting portrays Jesus gesturing in blessing with his right hand while holding a crystal orb in his left hand. It was sold to great fanfare last November by Christie’s New York as “one of fewer than 20 known paintings by Leonardo.”

Saudi royal Bader bin Abdullah bin Mohammed bin Farhan al-Saud bought the painting. He then handed it off to the Abu Dhabi Department of Culture and Tourism which plans to unveil it next month at the Louvre Abu Dhabi before its inclusion in an exhibition focused on da Vinci at The Louvre in Paris in 2019.