A so-called “far right” rally to be held this Saturday at Nathan Phillips Square is prompting concerns from B’nai Brith Canada.

In a letter sent to Toronto City Council, the Jewish human rights group is strongly urging the cancellation of the rally, which is scheduled for the one year anniversary of the riots in Charlottesville, Virginia.

Members of several far right, anti-immigration and nationalist groups are expected to attend.

But in a response late yesterday, the Acting Director of Equity, Diversity and Human Rights for Toronto says the rally will go on as planned. The response says “the city will not tolerate, ignore or condone illegal discrimination or harassment including any rally that incites hatred and/or violence against groups or persons.” The statement goes on to say “the city has already taken actions to address this matter which includes the preparation of an event plan with Toronto Police that has the safety of everyone as the primary concern.” 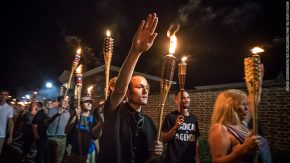 At the infamous Charlottesville riots August 11-12, 2017, neo-Nazis chanted hateful slogans against Jews, African Americans and LGBTQ people, and a counter protester was killed by a far right attendee.