Today the British Museum in London will hand back group of 5,000-year-old antiquities looted from Iraq after the U.S.-led invasion in 2003. 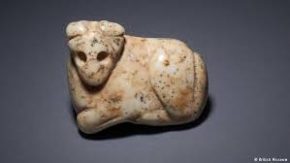 Among the eight items is a bull shaped marble pendent, seized by British Police in 2003 from a now-defunct London art dealer.

Earlier this year, British police handed the items, which include stamp seals and clay cones with cuneiform inscriptions, to the museum, where experts determined they came from a temple at Tello, in southern Iraq.

The British Museum is continuing to work with Iraqi archaeologists to help preserve the country’s ancient sites.