Toronto’s mayor has written an open letter to Ontario’s new premier asking to “hit the pause button” on plans to cut the size of Toronto City Council.

John Tory writes, “that something as fundamentally important as an election should not be changed without public input and in the absence of a clear process or robust understanding of public impacts and costs.” 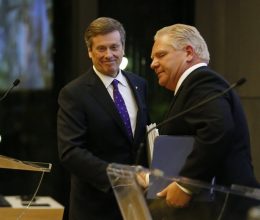 The mayor goes on to write what he’s been saying publicly since Doug Ford announced the plan two weeks ago, that he “urges the premier to consider putting the process on hold to allow for a referendum so we can let the people speak. To me, hitting the pause button is a sign of strength. I would respectfully suggest that the legitimacy of your government’s position dramatically increases if supported by a legitimate process.”

In his letter, Mayor Tory also says no party raised the prospect of slashing the size of Toronto council during the recent election campaign and in his view, no party has a mandate for such unilateral action.

Premier Doug Ford has proposed legislation which would cut Toronto city council from 47 to 25 wards in time for the October 22nd election. His announcement on July 27th came just hours ahead of a registration deadline for candidates for council, which he extended until September 14th.