Fredericton police say they have one suspect in custody following a shooting that left at least four people dead, including two officers, in the New Brunswick capital. 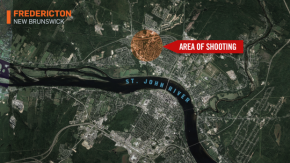 Police tweeted that two Fredericton police officers were among the four people killed in a shooting in the area of Brookside Drive between Main Street and Ring Road that occurred at approximately 7 am local time on Friday morning. The names of the victims are not being released at this time, police said.

“Please appreciate this is a difficult time for their families and our colleagues,” tweeted Fredericton Police.

One suspect was taken into custody.

“Awful news coming out of Fredericton. My heart goes out to everyone affected by this morning’s shooting. We’re following the situation closely,” tweeted the Prime Minister.

Just after 11 am local time, police confirmed there was no further threat and that lockdowns in the area were no longer required.

Between 7 am and 8 am local time, there was a large police presence on Brookside Drive in north Fredericton where officers appeared to be focused on a single residence.

Sounds of gunshots were heard by many people living and working in the area.

In a series of tweets about the incident, Fredericton police asked residents to avoid the area and stay inside their homes with the doors locked.

David MacCoubrey told various media outlets that he awakened to the sound of gunshots that sounded as if they were “10 metres” from his bed in his apartment on Brookside Drive at around 7:07 am. He said the first three gunshots he heard woke him up and that he heard as many as 17 more between that time and 8:30 am.

Rachel LeBlanc was on her way to work at a daycare centre in the area when she saw police cars speed by her at an intersection. She told CTV News Channel that she heard four gunshots at approximately 7:30 am when she arrived at the centre.

LeBlanc said the daycare centre is located “extremely close” to where the shooting occurred.

The daycare worker said she has already assured parents that their children are “very safe” and called the centre “secure.”

The shooting is a painful reminder of the deadly 2014 shooting rampage by a lone gunman that left three RCMP officers dead in Moncton, N.B., LeBlanc said.

“On behalf of all New Brunswickers, I offer my condolences, thoughts and prayers to the victims and their families. During this difficult time, our thoughts are also with the courageous women and men on the front lines working to keep us safe,” he said.

Other condolences included those from Toronto Police Chief Mark Saunders, “On behalf of the ⁦TorontoPolice⁩ Service, I extend our condolences to ⁦Fredericton Police⁩ in the loss of 2 officers, and our thoughts are with the loved ones of all 4 victims and everyone who has been impacted by this tragedy.”

“Heartbroken to hear about the shooting today in Fredericton including the deaths of 2 police officers. Toronto stands with Fredericton during this difficult time,” tweeted Toronto Mayor John Tory.

“My thoughts and prayers are with the loved ones of the police officers and other victims of this morning’s tragedy in Fredericton, New Brunswick. Your friends in Ontario stand with you during this difficult time,” tweeted Premier Doug Ford.