A highway bridge collapse in northern Italy has killed at least 20 people and injured 13.

The number of dead earlier had been as high as 22.

It happened in the Italian port city of Genoa during a sudden, violent storm. 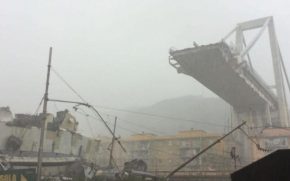 Italy’s Deputy Transport Minister Edoardo Rixi calls it “the biggest tragedy involving a bridge of this importance in Europe in recent decades.”

He said that at least 20 vehicles on the bridge had plunged in the collapse, and that also people in buildings below the bridge were in some way involved.

That included the trash management offices for the city of Genoa.

The disaster occurred on a major highway that connects Italy to France and other vacation resorts.

The bridge that collapsed is an important interchange between the northern regions of Lombardy and Piedmont and the beaches of Liguria, and to the main highway heading westward into France.