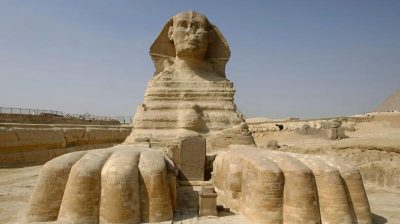 A surprise find in Egypt.

A previously unknown statue of a sphinx has been unearthed – by workers on the historic road between the famous Luxor and Karnak temples.

The Ministry of Egyptian Antiquities is developing a way to lift the newfound sphinx from its resting place – and work has been paused on the road.

Egypt is encouraging tourists to visit the site to see the statue – as the country struggles to rebuild its tourism industry after a lengthy slump – caused by political instability and a series of terrorist attacks.

The sphinx is a mythical creature with a human head and the body of a lion. In ancient Greek tradition the head is often that of a female who shows no mercy – killing and eating all those who cannot answer its riddle – but for Egyptians the guardian creature was seen as benevolent – and the heads of the statues were carved in the likeness of Pharoahs.