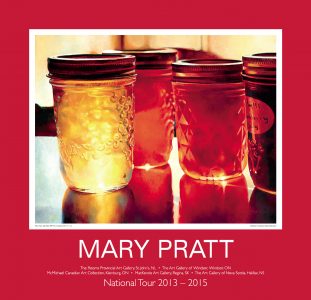 The acclaimed artist died peacefully at her home in St. John’s, Newfoundland on Tuesday.

Pratt’s work is featured in galleries across Canada.

The Fredericton-born artist was a masterful chronicler of the minutiae of domestic life –  gracing household artifacts with striking, if at times unsettling, realism.

In a statement her children said today “We were fortunate to grow up in the domestic world that informed our mother’s artistic life.We sat at her supper table, we filleted and ate the rich Atlantic salmon that our father caught from the river outside our door, savoured the warm brown loaves of bread, and lusted after the swirling cream-topped trifles.  When we were no longer sharing her home, we understood her life through her work.”

Among her many artistic achievements, Pratt’s children said she was most proud of being named a Companion of the Order of Canada in 1996 and her role in establishing The Rooms gallery in St. John’s.

Having studied under Alex Colville and Lawren Harris at Mount Allison University in Fredericton, she married fellow student Christopher Pratt in 1957 – and moved with him to rural Newfoundland in 1963.

As her husband’s reputation as an artist grew, Mary Pratt focused on raising a family and tending to domestic chores – that would eventually become the inspiration for much of her work.

“There was never a time when she was not a painter,” her children said. “She was skilled at talking and painting at the same time as we sat at her shoulder, looking for help with the barrage of concerns that fill the lives of growing families.”

The children said their parents’ marriage eventually ended – but the couple revived a deep friendship later in life.

Most of Pratt’s paintings explore her obsession with light, and some are remarkable for their level of detail.

Her 1999 oil painting Jelly Shelf  offers nothing more than a realistic close-up of four Mason jars – but the image practically vibrates with intensity – as sunlight streams through the glass, creating a shimmering iridescence.

Describing her own work, Pratt had said; “My only strength is finding something where most people would find nothing.”