FREELAND HEADING TO EUROPE AS NAFTA TALKS CONTINUE WITHOUT CANADA 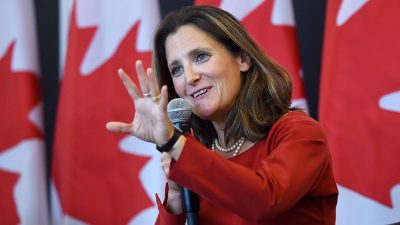 Foreign Affairs Minister Chrystia Freeland is off to Europe next week – on a diplomatic mission that’s raising questions about whether Canada expects to return to the bargaining table soon – for the three country NAFTA talks.

In Richmond, B.C. Freeland told reporters that it’s important for Canada to continue to do its work around the world – even with signs of progress in the bilateral NAFTA negotiations between the U.S. and Mexico.

There’s optimism that those two countries are close to sorting out their one-on-one sticking points – which would open the door for Canada to rejoin the negotiations.

Freeland was asked whether her European trip meant she didn’t expect a breakthrough next week in the NAFTA talks – and she said Canada will return to the NAFTA table for trilateral talks – once the American and Mexican governments resolve their bilateral issues – particularly their differences on automotive rules of origin.