Foreign Affairs Minister Chrystia Freeland will be back in Washington Tuesday after three months, to rejoin NAFTA negotiations amid renewed concern about the fate of the trilateral agreement. 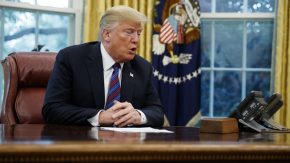 U.S. President Donald Trump was joined by Mexican President Enrique Pena Nieto by phone on Monday to announce they have reached a bilateral trade “understanding” that Trump hinted could mean the end of the North American Free Trade Agreement.

Trump invited Ottawa to join in talks, but threatened that if Canada doesn’t become part of the new trade deal, he would enact devastating tariffs on automotive imports.

During their televised phone call, the Mexican president reminded Trump four times that Mexico wants Canada to be part of an eventual trilateral agreement.

Political commentator Michael Taube told Zoomer Radio’s Fight Back with guest host Jane Brown, how Canada moves forward will ultimately be up to the prime minister.

“Justin Trudeau’s going to have to make a decision whether he wants to go ahead with a bilateral or discussions of a bilateral agreement with the U.S. or face the fact that the Americans are going to put heavy tariffs on our auto industry,” explained Taube.

Prime Minister Justin Trudeau’s office has issued a statement saying said he had a “constructive conversation” on the phone late Monday with Trump, but offered few details other than the two leaders “look forward to having their teams engage this week with a view to a successful conclusion of negotiations on NAFTA.”