It’s looking more likely that there will be virtually no federal Conservatives willing to join Maxime Bernier in his effort to start a new federal party. 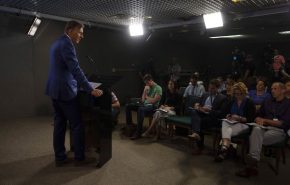 Bernier who resigned from the Conservatives last Thursday, announced a plan to create a new right wing camp, accusing the federal Conservatives under Andrew Scheer of being intellectually and morally corrupt.

The following day, the Globe and Mail sent a question to all Conservative MPs asking whether they would join Maxime Bernier’s new party. 92 of 96 members responded saying they will not join the proposed party. Four did not return the email or a follow up phone call; Kellie Leitch, Scott Reid, Peter Van Loan and Dave MacKenzie.

Members of Bernier’s team feel the new party could attract a few former colleagues if it gains traction in the electorate.

Bernier himself is away with his family for the week and says he’s working on Elections Canada documents to launch the new party as he calls supporters across the country.