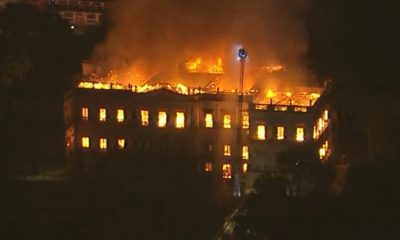 The National Museum of Brazil says that centuries-old Torah scrolls had been moved – before a massive fire gutted much of the largest collections of national history artifacts in Latin America.

The scrolls are considered to be some of Judaism’s oldest documents – possible dating back to the 13th century.

The museum’s website says the nine scrolls written in Hebrew – were not part of the museum’s exhibit but were kept in a safe in the director’s office.

That good news came as officials said they feared as much as 90 per cent of Latin America’s largest collection of treasures may have been lost in the fire – the cause of which is still under investigation.