It’s a reflection of the popularity and quality of productions coming from Netflix.

The Toronto International Film Festival opens Thursday evening, and for the first time with a film from a streaming giant – the world premiere of the historical drama Outlaw King starring Chris Pines as a 14th century Scottish outlaw hero.

Buzz from insiders at the festival is that many long time sponsors are not happy with the choice of a Netflix film as the opener.

TIFF has embraced TV, even as the older Cannes Film Festival declined to screen several Netflix films because the online broadcaster would not guarantee a theatrical opening.

Artistic director Cameron Bailey says they can take chances at TIFF because of the saavy audiences in this city. 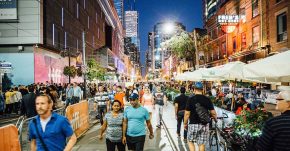 And once again King Street is being named Festival Street. It’s closed to all traffic, including transit, between Spadina and Unversity Avenues until 5am Monday. TIFF continues through September 16th.