It’s all but a done deal.

In an unprecedented move, Premier Doug Ford is recalling the legislature Wednesday to use the notwithstanding clause in the charter of rights and freedoms to push through the bill that reduces the size of Toronto City council to 25 wards.

It’s the first time the Ontario government is using section 33 to override a court decision on charter rights. In this case, the PCs at Queen’s Park will invoke the clause to overturn a Superior Court decision ruling the shrinking of Toronto City Council during an election campaign as unconstitutional.

PC MPPs are firmly behind their leader, with every indication, they will all back Ford in his bid to cut Toronto Council.

But there is much descension to the move in wider circles. Former Prime Minister Brian Mulroney says he did not once ever consider invoking the notwithstanding clause. 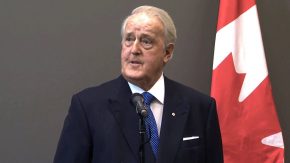 “I was never tempted to use it and I didn’t use it, and I had no interest in using it no matter what,” Mulroney explained.

Mulroney says the rule of law is something we value as Canadians, “a major thrust of our citizenship is the affirmation of the rule of law through our federal judiciary and the provincial as well.”

Mulroney also said he has yet to speak with his daughter, Ontario Attorney General Caroline Mulroney, about the developments on her government using the notwithstanding clause.

Mayor John Tory has called a special session of council Thursday so city staff can brief councillors on how they will move forward with 25 wards in the October 22nd election.