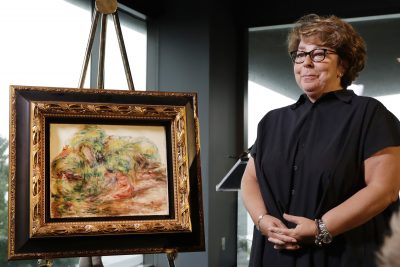 The granddaughter of a Jewish art collector whose paintings were stolen by the Nazis –  has been re-united with one of the pieces : an Impressionist work by Pierre-Auguste Renoir.

Sylvie Sulitzer saw the 1919 oil painting “Two Women in a Garden” for the first time on Wednesday – at New York’s Museum of Jewish Heritage – in a ceremony that included the law enforcement officials who helped get the painting back to her.

Sulitzer’s grandfather, Alfred Weinberger was an art collector in Paris – who put some of his paintings in a bank vault before fleeing the Nazis – whose own records show they raided the vault and took Weinberger’s paintings – including the Renoir.

The painting was scheduled to be auctioned back in 2013 – but Sulitzer’s lawyers reached out to the auction house – which then notified the FBI.