THE HOUSE CLEANING CONTINUES AT CBS 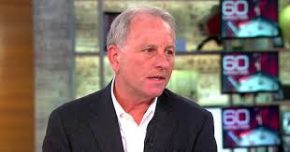 63-year old Jeff Fager was under investigation following reports that he groped women at parties and tolerated an abusive workplace.

Fager has denied the charges.

“60 Minutes” is the most popular and powerful network news broadcast on U.S. television.

Fagar was just the second person in charge of the program. He succeeded founding executive Don Hewitt in 2004.