An emergency meeting of Toronto City Council is scheduled for Thursday as local politicians weigh next steps, following the Ontario PC’s unprecedented move to revive a controversial bill to cut council by nearly half.

It’s a decision that prompted a demonstration against the move by Premier Doug Ford at Nathan Phillips Square.

City of Toronto lawyers challenged the controversial legislation in court and an Ontario judge agreed earlier this week that passing the bill to reduce council from 47 to 25 wards in the middle of an election campaign, violates the freedom of expression rights of both candidates and voters. But Premier Doug Ford quickly announced he would take the unprecedented step of invoking a constitutional provision to override the ruling. 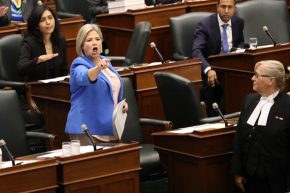 The opposition New Democrats, including leader Andrea Horwath, were later booted from the house as they attempted to drown out the reading of the bill. The bill has passed first reading with second reading and more opposition to it expected Thursday.

There was a compromise of sorts from the Ford PCs.  The new bill, dubbed the Efficient Local Government Act, says the nomination deadline for candidates seeking to run in the October 22nd election would be set for two days after the new legislation receives royal assent. All council candidates registered must notify the Toronto city clerk if they still want to run.