The Canadian who played the father of agent Fox Mulder on “The X-Files” has died at the age of 90. 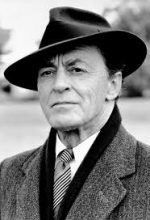 Peter Donat, who was born in Kentville, Nova Scotia, died from complications of diabetes at his home in California.

Donat’s other TV appearances include “Murder, She Wrote” (which airs on our sister station, Vision TV) as well as “Hawaii Five-O,” “Hill Street Blues” and “The F.B.I.”

He also appeared in the Francis Ford Coppola films “The Godfather Part II” and “Tucker: The Man and His Dream.”