ANOTHER "TRUMP" TELL-ALL IN THE WORKS

There is yet another tell-all book about the Trump Republican Administration on its way. 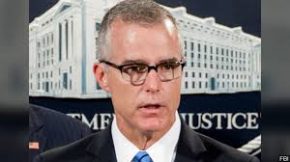 The 50-year old McCabe was ousted after repeated attacks from Trump and a critical Justice Department report.  His new book, “The Threat: How the FBI Protects America in the Age of Terror and Trump” will be published December 4th.

The publisher is calling the book a candid account of McCabe’s career and his defense of the FBI’s independence.