Now that the El Mocambo’s newly recreated palm tree sign has been lit in a ceremony at the iconic Toronto club Thursday night, Michael Wekerle says he hopes to conjure up a spell of rock star magic. 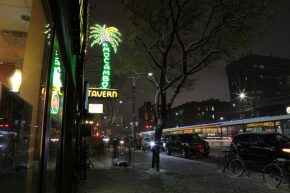 The former Dragon’s Den star bought the famous building on Spadina Avenue about four years ago for $3.8-million dollars and next year he plans to open the space.

Toronto Mayor John Tory was at the lighting event singing the praises of Wekerle for having a vision to help renew Toronto’s live music scene.

“This man, Michael Wekerle, is putting his heart and his soul, and lots of his money into refurbishing, and the sign and coming back to life so the people can play under the palms is the first indication that we’re going to see the El Mo back in business, and it’s going to be again what it was before, an exciting place that’s like a must-stop venue for a lot of the world’s great artists who come here and do something really special and that’s part of making Toronto music city,” Tory explained.

Back in 1977, The El Mocambo hosted The Rolling Stones when they recorded part of their Love You Live album and U2 played their second North American show there in 1980.