ANOTHER CALL FOR STABLE FUNDING FOR THE TTC 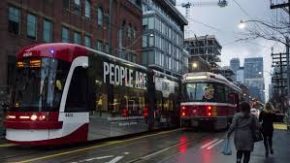 A new report points to vulnerability and under funding when the TTC is compared with other similar networks.

Author Cameron McLeod says Boston get 70% of its funding from government subsidies, Los Angeles gets nearly 90% while Toronto gets less than a third of its operating budget from the subsidies.  He’s calling for a more stable funding model.

The report recommends the TTC gets a constant source of revenue through taxes and levies and a governance structure which is situated in Toronto and works closely with other regions.

The Ford Government at Queen’s Park plans to takeover the TTC subway infrastructure as a means of helping fund and deliver transit projects sooner.