Esi Edugyan has won her second Giller Prize, this time, for Washington Black. 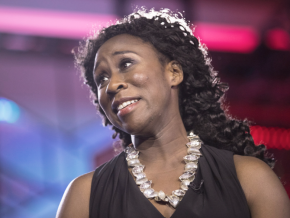 In accepting the $100,000 Canadian literary prize, the Victoria-based author says her second time winning it feels all the more meaningful amid a climate in which “truth isunder siege.”

Washington Black follows the saga of an 11-year-old boy who escapes slavery at a Barbados sugar plantation with the help of the owner’s brother.

In an interview after last night’s ceremony at Toronto’s Ritz Carlton, Edugyan said in these fraught times, it’s vital to tell stories that can connect readers with experiences outside one’s own.

Edugyan previously won the Giller Prize in 2011 for her second novel Half Blood Blues.

Washington Black was also shortlisted for the Man Booker Prize and the Writers’ Trust fiction award.