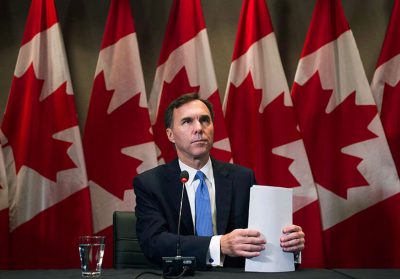 The clock is ticking down to the federal government’s presentation of its latest fiscal plan.

The business community is calling on federal Finance Minister Bill Morneau to respond to the Trump administration’s tax and regulatory overhaul – with significant changes of his own in Canada — including corporate tax cuts.

But the government has signalled it will focus on targeted measures – to attract investment.

Meanwhile – The Bank of Canada is researching whether it should change the nearly 40-year-old inflation-targeting framework it uses as a basis for its policy decisions – including interest rates.

Senior deputy governor Carolyn Wilkins says the goal of keeping inflation close to a target of two per cent -established in 1991 – has improved the financial well-being of Canadians – but downsides have emerged a decade after the global financial crisis.

And she says one concern is that lower interest rates – may entice Canadians and investors to take on excessive risk.

Wilkins says the Bank of Canada is conducting research on alternative frameworks – including a higher target for inflation – and a more flexible, dual mandate that would extend the bank’s focus – to also incorporate labour and other economic indicators.