The Canadian scientist who won a Nobel Prize for helping develop insulin, has added another accomplishment to his list, this time, posthumously as an artist. 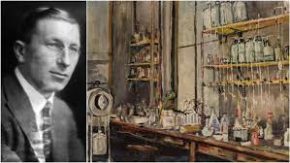 A 1925 painting of the University of Toronto Lab where Banting and Charles Best discovered insulin in 1921, set a new record for his paintings – going for more than $313,000 at a Heffel Fine Arts Auction in Toronto.

The painting is believed to Banting’s only known interior scene.  It sold for more than ten times its pre-sale estimate.

Banting was recognized for his skill as a landscape painter which earned him the friendship of the Group of Seven’s s A.Y. Jackson.

Heffel is going to donate its $53,000 commission from the sale to the U of T’s Banting and Best Diabetes Centre.