Business groups have come out strongly in support of the Trudeau government’s fall economic update. 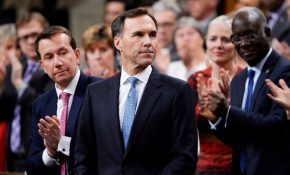 Finance Minister Bill Morneau has announced billions of dollars in tax breaks for businesses in an economic update that gives priority to corporate incentives rather than shrinking the federal deficit. Morneau framed his document on Wednesday as the government’s response to dealing with the competitiveness challenges posted by aggressive tax and regulatory moves in the U.S.

That decision is not going over well with Conservative Finance Critic Pierre Poilievre, who said in the House of Commons, “this economic update reports that the deficits for the next five years will all be larger than they projected just six months ago in the 2018 budget.”

Morneau also outlined that a strong economy has given Ottawa an extra $22-billion in revenues over the next five years, compared with expectations in this past February’s budget.

New Liberal tax incentives to encourage investment in Canada are worth 14-billion over five years and include allowing manufacturers and the clean-tech industry to write down all capital costs right away.

For the fiscal year to date, the finance minister says the federal government is in the black, posting a $1.2 billion surplus, compared with a deficit of $6.2 billion for the same April to September period last year.

Join Zoomer Radio’s Fight Back with Libby Znaimer after Thursday’s noon news for comprehensive reaction to the economic update.