Italy’s famous Leaning Tower of Pisa is now another four centimetres straighter after more than twenty years of effort. 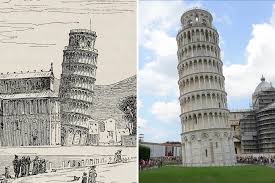 It’s the second time engineers have been able to reduce the lean. They’ve to straighten it by more than 40 centimetres through the extraction of soil from under the foundation and then using hundreds of tones of lead counterweights at the base.

That work took more than a decade and forced the closure of the 12th-century Tuscan bell tower. It reopened to the public in 2001