Federal NDP Leader Jagmeet Singh has learned he will soon get a chance to win a British Columbia seat in the House of Commons, just as a friendlier riding on his home turf of Brampton became available.

Liberal Raj Grewal announced yesterday that he is resigning as MP for Brampton East for unspecified “personal and medical reasons.”

The surprise news about Grewal came just as Liberal insiders were confirming that early in the new year, Prime Minister Justin Trudeau will call three byelections, including in Burnaby South, where Singh has already been nominated to run. 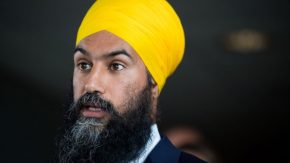 “I was worried that 300,000 Canadians who all deserve representation weren’t having the opportunity to choose their representation, but I’m now encouraged to see that there is confirmation that this is going to happen,” Singh explains, “It gives us an opportunity for us to hold this government to account.”

When Singh was first chosen as NDP leader a year ago, he said he would like to run federally in Brampton East, the riding he had represented for six years in the Ontario legislature.