Workers at Oshawa’s GM Assembly Plant are heading to their jobs this morning as news of the plant’s closure gains momentum. 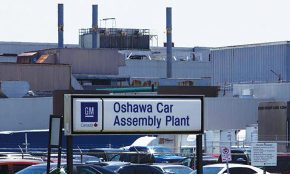 It’s been widely reported that the plant is going to close as part of a global restructuring plan by General Motors toward lighter and electric vehicles.

Oshawa Mayor John Henry says he’s heard nothing official about the news, but “this plant has been a big part of the economy of this province for over 100 years.”

An announcement from General Motors is expected at 10 o’clock Monday morning.

Unifor is the union that represents 2200 employees at the plant. President Jerry Dias has released a statement saying, “we have been informed that as of now, there is no product allocated to the Oshawa Assembly plant past December 2019.”

The last contract negotiations between GM and the union were in 2016. At the time, Unifor reps lauded the contract with GM publicly for ensuring the sprawling plant would be in operation well past 2019.

SECOND PERSON BELIEVED SWEPT OUT TO SEA DURING STORM FIONA