World leaders are calling on Russia to stop provoking Ukraine and are urging the authorities to return any Ukrainian ships or sailors it is holding amid a naval standoff in Crimea. 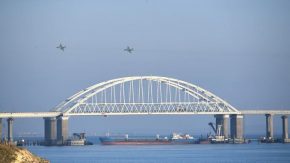 (Moscow has blocked passage through the Kerch Strait, between Crimea and mainland Russia, after three Ukrainian navy ships made what the Russian authorities have called a violation of Russian territorial waters.)

The European Council President said in a tweet Monday, “I condemn Russian use of force in Azov Sea.” He added that “Russian authorities must return Ukrainian sailors, vessels and refrain from further provocations.”

He said he has discussed developments with Ukrainian President Petro Poroshenko and will meet the Ukrainian leader’s representatives later Monday.

German Chancellor Angela Merkel’s spokesperson is calling on Russia to release Ukrainian sailors and ships, as is Canada’s Foreign Affairs Minister Chrystia Freeland. She says in a tweet, “Canada is unwavering in its support for Ukraine’s sovereignty.”

The Russian coast guard fired on three Ukrainian ships Sunday near the Kerch Strait, then seized them along with the crews.