A British socialite, codebreaker and politician, who once made a rather rude gesture in the House of Lords to a Peer who had the audacity to refer to her age, has died at the age of 96. 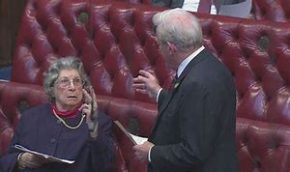 Jean Baker, better known by her title, Baroness Trumpington took exception to being called old.  She later clarified she was giving the member the “peace sign.”

Baker was was born into a wealthy family, served in naval intelligence at the Bletchley Park code breaking centre which solved the German Enigma Code machine. She later became mayor of Cambridge and entered the House of Lords in 1980.