TRUMP'S PRESIDENCY A RUNNING THEME DURING THE CLINTONS' TORONTO APPEARANCE

The Clintons were in town Tuesday night to launch their 13-city speaking tour. 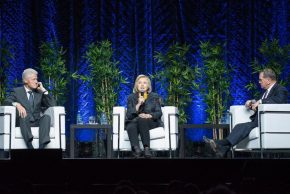 Former U.S. President Bill Clinton and former U.S. Secretary of State Hillary Clinton spoke in Toronto at the Scotiabank Arena on a number of topics, including the presidency of Donald Trump.

“I find it’s better to be brutal with people in private. They respect you and they’re much more likely to believe you than if you bad-mouth them in public for the evening news and then you smile woose around with them in a private meeting,” Bill explained.

The interview between The Clintons and Frank McKenna, the former Canadian Ambassador to the United States, was friendly and lighthearted. McKenna asked Hillary whether the tour was designed so she and Bill could spend more time together or if she’s considering a presidential run in 2020. Hillary joked to much applause, “I’m thinking about standing for parliament here in Canada.”

The event was not sold out.