Amanda Simard has resigned from the Progressive Conservative caucus at Queen’s Park. 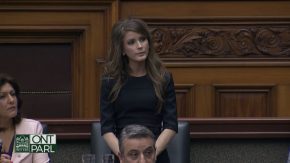 The rookie MPP, who represents the mostly Franco-Ontarian riding of Glengarry-Prescott-Russell, has made headlines this past week for standing up to Premier Doug Ford against his decision to kill a planned Francophone university and eliminate the French commissioner’s office.

This morning, Simard has sent a letter to the speaker saying that effective immediately, she is no longer a member of the PC caucus and will continue to take her place in the Legislative Assembly of Ontario as an independent.

Political strategist Charles Bird told Zoomer Radio’s Fight Back with Libby Znaimer yesterday, he credits Simard for defending the rights of her constituents.

Simard’s decision to sit as an independent means for now, she has not “crossed the floor”, to join the Liberals or New Democrats.

A Toronto Star report on the weekend quoted unnamed sources as saying that no fewer than 7 PC MPPs are considering leaving their party.