YOUNG AND DYLAN TOGETHER IN LONDON

Fans of Zoomer legends Neil Young and Bob Dylan will want to be in London’s Hyde Park next July 12th. 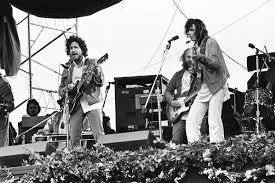 The picture is from the first time they performed together in March of 1975.  And while Young and Dylan have shared a stage many times since, the London concert will be the first time they’ve been joint headliners at a U.K. music festival.