The United States Mexico Canada Agreement has been formally signed in Buenos Aires. 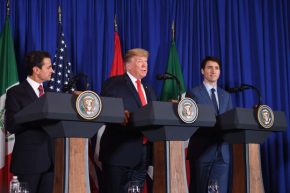 Prior to signing the USMCA on the sidelines of the G20 Summit Friday morning, U.S. President Donald Trump, Canadian Prime Minister Justin Trudeau and the outgoing Mexican president offered their comments.

And Trump appeared to reference that rocky time in June when he called Trudeau “very dishonest and weak.”

Justin Trudeau got in a little jab this morning, when he spoke of the Oshawa GM plant shutdown.

“And Donald it’s all the more reason why we need to keep working to remove the tariffs on steel and aluminum between our countries,” Trudeau inserted.

In response, Trump looked stone faced and did not react either way to Trudeau’s comments about removing tariffs.

The deal needs to be ratified by the governments of all three countries before it can formally take effect.

U.S. tariffs on steel and aluminum remain in place.