The late George H.W. Bush is set to embark on his final tour of Washington as a nation prepares to bid farewell to its 41st president. 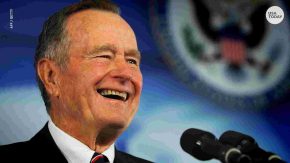 His remains arrive in Washington Monday, and he will lie in state at the Capitol through Wednesday. An invitation-only funeral service is set for Wednesday at Washington National Cathedral. Former Canadian prime minister Brian Mulroney will be among the four people to deliver eulogies during the service.

Bush will then be returned to Houston for burial Thursday at his presidential library at Texas A & M University.

Former U.S. Secretary of State James Baker shared a special moment with his long time friend before the former president passed away, when he went to visit him on Friday morning.

“Hey Bake where’re we going today?” Baker says the former president asked him, “And I said,”well Heffie, we’re going to Heaven,” and he said, “good that’s where I want to go.”

George H.W. Bush will be laid to rest alongside Barbara Bush, his wife of 73 years who died in April, and Robin Bush, their daughter who died of leukemia at age 3.